This story was originally published here

Trump Rants on Earnings Season After Complaints From Buffett, Dimon 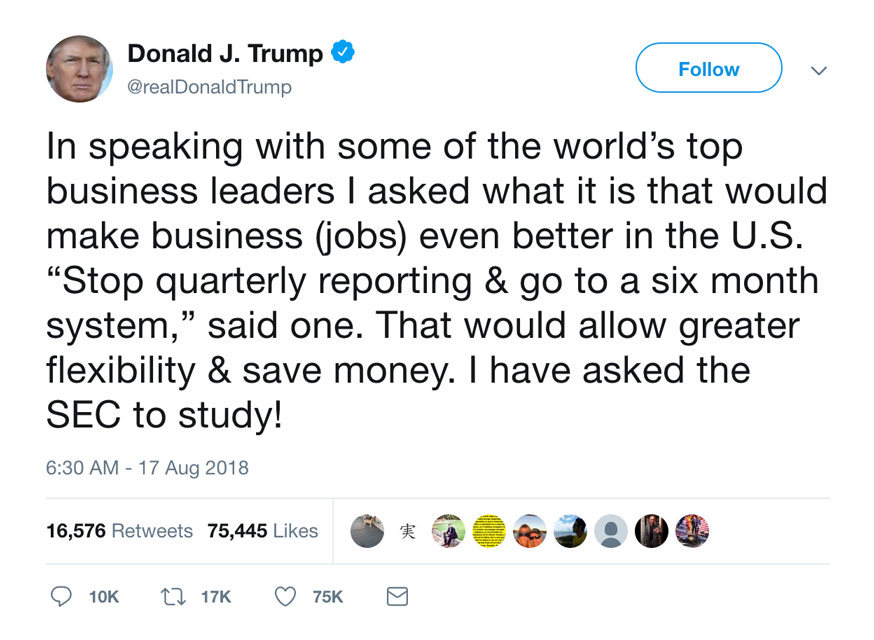 President Donald Trump wrote in a tweet Friday that he wants the Securities and Exchange Commission to study the possibility of requiring companies to report earnings every six months instead of three, as is the current practice.

In less than two years as president, Donald Trump has shaken up the business and investing establishment with controversial trade policies, from-the-hip assaults on corporate giants like Amazon.com Inc. (AMZN – Get Report) and off-script jawboning of the Federal Reserve.

Now, he’s taking on another pillar of corporate America: the quarterly earnings season.

In a Tweet Friday, Trump wrote that he had asked the U.S. Securities and Exchange Commission to study whether publicly traded companies should be allowed to report their results every six months instead of three months, as is the current practice.

Trump said that he made the request after speaking with some of the world’s top business leaders about how to “make business (jobs) even better in the U.S.” One of them told him that the answer was to stop quarterly reporting in favor of a six-month process, according to the tweet.

“That would allow greater flexibility & save money,” Trump wrote. “I have asked the SEC to study!”

While it may seem strange that a president known for tweeting both major policy announcements and his private thoughts several times a day might want companies to provide information less frequently, the quarterly frenzy of earnings releases has long generated complaints from CEOs. The reports, which the SEC requires to make sure investors are fully informed about the ongoing performance of publicly traded companies, have been criticized for encouraging short-term thinking among corporate executives while discouraging investment in long-term growth.

SEC Chairman Jay Clayton said later Friday in a statement that the agency “continues to study public-company reporting requirements, including the frequency of reporting.” The SEC is considering regulatory changes that would “encourage long-term capital formation” while protecting investors, he said.

“The president has highlighted a key consideration for American companies and, importantly, American investors and their families — encouraging long-term investment in our country,” Clayton said. “Many investors and market participants share this perspective.”

Companies in Europe already have the option of posting results every six months, though some still opt to report every three months voluntarily, or pursuant to the requirements of a stock-exchange listing in the U.S., said Jordan Darrow, founder of Austin, Texas-based Darrow Associates, a national investor-relations consulting firm.

A change in the reporting frequency wouldn’t likely save companies much money, since they’ll still need to retain staff to handle the mid-year and year-end releases, Darrow said. Costs that pertain directly to the quarterly reports, such as a $500 press release and the accounting and legal reviews, are relatively minimal, he said.

“It’ll save a little money but it’s probably inconsequential for most companies,” Darrow said.

It’s probably true, however, that moving to a six-month reporting period would encourage longer-term thinking among executives and investors, he said. The news might be unwelcome for day traders and hedge funds that rely on computer-driven algorithms to scan news headlines.

“What you will do is, maybe for the benefit of the markets, create a more longer-term perspective on financial performance, which in turn will likely result in less trading volatility,” Darrow said. “But if you reduce your information flow there’s going to be less actions to base your trades upon.”

The National Institute of Investor Relations, a professional association, hasn’t taken an official position on the frequency of quarterly earnings reporting, according to Ted Allen, vice president for communications. However, he wrote in an e-mail, the group has encouraged companies to provide long-term earnings guidance, if they choose to provide guidance at all.

“We certainly support efforts to promote long-termism within our capital markets,” Allen wrote.

Chris Hodges, CEO of Chicago-based investor-relations consultancy Alpha IR Group, wrote in an e-mail that “short-termism” has become a “distraction” for public companies.

“As such, we would generally be supportive of policy changes that would make it easier for our client-management teams to spend more time focusing on running their businesses,” he said. “Having said that, we do believe moving to a six-month reporting schedule could have significant ramifications on trading activity in today’s highly sophisticated public markets, and therefore believe the impacts of such a change should be studied extensively.”

Companies could still voluntarily report earnings on a quarterly basis, Darrow said, especially smaller firms that are looking to generate interest among investors. And management would still have to provide an update whenever there’s a material change in the underlying business, he said.

“If you’re a company that wants that transparency, you’re free to report whenever you want,” Darrow said. “But the majority of public companies would like to report less if they could.”